If you're a white American player in the NBA, it seems to me that you're going to be one of two things: 1) a hustling banger big man down low who fights for rebounds, and gets most of his points through put-backs or dunks in transition or 2) a designated shooter who's best strength is to move ever so slightly, catch the ball and shoot it from no closer than 25 feet.

Combing through all 30 team's rosters just now, I found that what I felt was true actually wasn't very far off from reality. From now on, we're going to use these numbers and designate them to white NBA players, when necessary. Here's a list:

I don't have an official count of white Americans in the league, but suffice to say that the 19 men I just listed above illustrates my point finer than a Norman Rockwell painting. They all have one thing in common: they're role players. They have a specifically defined role, and for the good of the team, rarely step outside of it.

We've reached the end of the 2011-2012 NBA season, as brief as it was, and as we here at MAMBINO HQ give out awards such as Coach of the Year, All-Rookie Teams and All-Defensive Teams, we also have to finish out the these 66 games with White American Player Power Rankings, version 3.0.

Just like any season since 1961, compiling a top 5 has been a tough task in a mostly black league, but that's why we're here my friends; to do the dirty work. In case you want to check them out, here's our first rankings, and then version 2.0. Let's get to it: What strikes me most about Love is that while most of his caucasian brethren are so closely ratcheted to one of the two aforementioned designations for people of their pigmentation, number 42 has managed to take both roles and combine them together into a sublime hybrid of white glory. Whereas most players only have the skill set to either be a hustling rebounder or a long range shooter, Love does both better than almost anyone. He finished off the year scoring 26 points a game, with 13 boards (2nd most in the league, with the 5th most offensive rebounds), all while shooting an amazing 37% from beyond the arc.

When he was traded to the Timberwolves in a draft day transaction with the Memphis Grizzlies, most of us thought that Love would be glorified hustle player, whose effort and determination would get him by in a profession where most make it through athleticism and natural ability. I remember thinking that, at best, Love would end up having Brad Miller's career, who with two All-Star appearances, isn't a bad thing.

Kevin Love is going to end up finishign in the top 5 or 6 in MVP voting. Pretty good for the winner of the Young Burt Reynolds Facsimile Contest.

It's ironic that the Magic just got rid of Rashard Lewis' $121 million dollar deal, only to hand out what will probably be a 4 year, $45 million dollar deal to Ryan Anderson this summer. Yes, you're only paying him for half the price for the same production, but you're still also paying money to a power forward who's just a tall designated shooter and has zero post game. Brilliant stuff, GM Otis Smith.

Regardless, Anderson is having a fantastic year and absolutely deserves this lofty number 2 spot in our rankings. He's finishing up a career season, averaging 15.9 ppg, 7.6 rpg while stroking a nearly 40% mark from 3 point land. Like Love, Anderson breaks out from being a strict 1) or 2) with a somewhat respectable rebounding acumen. He's played his ass off in a very difficult work situation in Orlando, and should get a fine, fine payday this summer.

Say what you want about the Warriors, but David Lee averaged 20 points and nearly 10 rebounds this year. The Dubs might suck, but Lee ain't no bitch. After the trade of Monta Ellis in March, Lee was gifted with an amazing 20 shots a game, scoring 23 points on them.

Lee essentially is a 1), but probably the most skilled, polished and hardest hustling pure 1) you can find. He'll get a lot of help next year with Andrew Bogut manning center, and Steph Curry at the point, health permitting. Lee's always had to play far above his skill set, whether it be in the Bay or with the Knicks, so I think we'll see him range more towards the 13 point, 8 rebound guy he actually is next year with more talent around him. He'll probably drop a little bit in the WANPPR, but not in our Handsome Rankings. Which we don't tell anyone about.

Yes! MAMBINO's favorite resident ballin' Wooly Mammoth is back in the WANPPR! 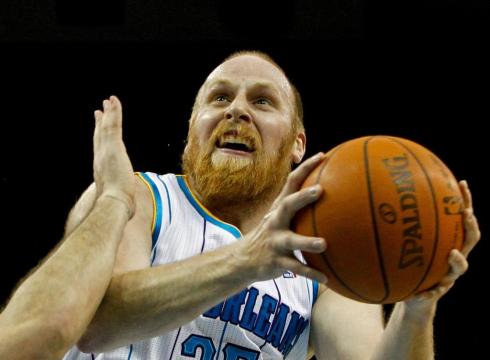 After being shopped for months on the trade market, the New Orleans Hornets weren't able to find a taker for Kaman's expiring $10 million dollar contract. Much to the surprise of fantasy-owners everywhere, Captain Terror-Face unleashed an absolute sizzling February and March, averaging over 16 points, 9 rebounds and 1.5 blocks a game for a lottery-bound team with nothing to play for. While the logic for a near-30 year-old Kaman was to play for a new contract in the offseason, you've got to admire Dr. Moreau's finest piece of work playing his ass off in a desolate situation.

Do you remember Linsanity? It seems so long ago that our friend with a jumper as silky smooth as his Asian locks of hair came and departed us. In his absence? Novak Fever has hit Midtown Manhattan with a fury that none of us saw coming, and some of us still quite don't believe is happening.

Yes, it's true: Steve Novak, a 28 year-old 6'10" small forward with face of a 48 year-old has emerged from a relatively undistinguished career to being one of the key contributors of YOUR...playoff-bound New York Knicks. Novak has come out of the All-Star break averaging 10 points a game, while throwing up 6.8 shots, 5.8 of which are 3 point attempts. That's not shocking for Steve, who's only discernable NBA skill is, you guessed it, being a stand-still shooter. He's knocking down a scorching 47% of his long balls, leading the league in 3P%.

Most importantly, the shots that Novak are making are big, momentum swinging shots. Perhaps it's the advanced 48 year-old man that seems to live in the pores of his face, but Novak has absolutely no compunction about taking the ball in big moments. Though I would normally take offense from Steve taking the discount-double-check from Aaron Rodgers, who in turn took it from Triple H (both men who, unlike Novak, won something), he's just been too good to hate on. Welcome to the rankings, Steve.

GM: Daryl Morey
Posted by KOBEshigawa at 9:42 AM