Do They Have Enough to Get Past Miami? - Boston Celtics Season Preview

(The King is again traveling. Posting on his behalf. You know the drill) 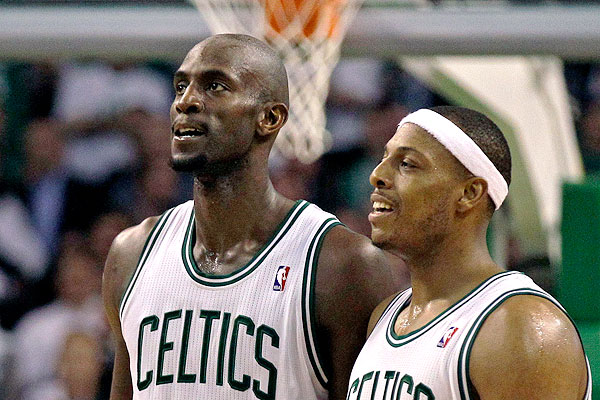 If the last few years had proven anything to us, it’s that the Celtics team that shows up to play this spring will perform vastly different than the one that coasts through the 82 game regular season.  Unlike every other team in the league, the Celtics have little to play for during the regular season. Any squad that relies on high-intensity defense and has a “Big Three” that consists of two 35+ year olds, one of which has knees that are less sturdy than a rope bridge during an earthquake, will not be consistent enough to challenge for the conference’s top two seeds. Yet, because the Eastern Conference is so shallow, the chances that Boston fails to clinch one of the top six seeds are pretty low unless they have significant injuries.

The Boston Celtics real season begins when the playoffs start. The NBA playoff structure will require the Celtics to defeat three teams in their NBA Finals quest but the fact is, only one team matters. Unlike the Western Conference which can lay claim to six legitimate title-contending teams, the Eastern Conference has only one elite team – the defending champion Miami Heat. If you’re good enough to beat the Heat, you’re going to beat any other team you match up against in the Eastern Conference playoffs barring injuries. For that reason, the remainder of this preview is going to focus exclusively on how the Celtics match up against the Heat.

The Celtics team that lost the Eastern Conference Finals in seven games last year had no hope of defeating the champs this year. Fortunately for the C's, the squad they’ve built this year is far better than the one that couldn’t hold onto a 3-2 series last year. For Boston, it's all about beating Miami. Let's take a look at how the team's offseason changes impact their ability to combat the defending champs:


1.   Avery Bradley – I’ve seen a few writers downplaying Boston’s chances to upset Miami this year based on Miami’s performance when Chris Bosh was healthy for the last two games. I’ve yet to see one of these writers mention how injuries at 2-guard for the Celtics significantly impacted their performance. Due in large part to the suffocating defense Bradley played against in the 2 regular season games that he started against Dwayne Wade, Bradley’s plus/minus number around 12. As numerous statistics last year showed, the Celtics are a much better defensive (and overall) team with him in the lineup. As those that watched last year’s conference finals remember, the Celtics surprisingly doubled Wade more often than LeBron. With Bradley’s aggressive on and off-ball defense, the Celtics can afford to direct more of there double teams at James this year while still limiting Wade’s production.

Bradley is also an underrated offensive player.   Before enduring two shoulder injuries that required offseason surgery (which will keep him out for the beginning of the season, and perhaps longer), he showed a much improved jump shot, as evidenced by his 41% 3PT FG%.  In addition, he’s one of the league’s best cutters and consequently scored a lot of easy baskets for the Celts last year, something they will need more of against the Heat this postseason. Still developing at 21 years old, Avery Bradley has the chance to be a big-time asset for the Celts against the Heat in the 2013 playoffs.

2.   Jason Terry/Courtney Lee – Let's get this straight: I effing love Ray Allen. As much as Hall of Famers can be, he’s underrated.  Anytime a fellow fan criticized him during a shooting slump, I was the first one to come to his defense. Both Celtics management and players should be ashamed of themselves for questioning Allen and his loyalty after they way they’ve treated both him and Rondo in the past. With all that said, because of the painful bone spurs in his ankle, he performed very un-Ray Ray-like last April and May.

As much as it pains me to say this, a healthy Jason Terry is better in almost every major facet of the game then Allen was during the playoffs. Terry’s not a great defender, but he is bigger and quicker than an old and crippled Ray Allen. With JET, you're looking at a very good shooter and significant upgrade over Bum Ankle Ray Allen who shot comparatively poor from all over the court, including the free throw line, in the playoffs last year. In addition, Terry has the ability to create his own shot off the dribble, a skill the Celtics lacked coming off the bench last year.  Jason Terry reflects a huge upgrade over Bum Ankle Ray Allen, whose shooting struggles during last year’s playoffs were shocking.

3.   Jeff Green – Jeff Green’s day-to-day performance certainly didn’t earn him his 4-year, $36 million contract this offseason. Potential and his ability to guard LeBron James did. Green’s primary role will be to guard James when subbing for Pierce and when playing in small ball lineups. As skeptical as I am about Green, he is a huge upgrade over Mickael Pietrus, whose defense in last year’s playoffs was horrendous. In addition to making it tougher on LeBron, the D Green brings to the table will allow Pierce to take a break from defending the reigning MVPwhen the Celts go small, allowing Pierce to save more of his energy for the offensive end if needed.

4.   Courtney Lee – Because he can shoot 3 pointers very well and plays solid defense, Courtney Lee would be a valuable player for any team in the league. However, he will be particularly valuable for the Celtics, since he’ll largely be replacing minutes for subpar bench players Keyon Dooling and Marquis Daniels . Small upgrades such as these can be the difference between a W and a L in closely played games.

5.  Jared Sullinger and Fab Melo – Neither of these rookies is likely to play a huge role against the Heat, particularly if the Celts decide to play a lot of small ball. Sullinger will help reduce Brandon Bass’ minutes which were fairly high late in the series. Some also think he has the potential to be a better player than Bass before season’s end, but I don’t think that’s likely.

Fab Melo will take over the big Steamer’s role this season. Stiemsma didn’t play a ton in last year’s series, and I wouldn’t expect Fab Melo to either if the Celts meet the Heat in the playoffs.

I’d be remiss if I failed to mention Rajon Rondo in a Celtics preview. What else can you say about the guy that hasn’t already been said? Because of his special court vision, elite ball-handling, speed and his strong ability to finish, he is one of the top playmakers in the NBA. The 26-year old continues to progress as a player, as evidenced by his improved (but still not adequate) mid-range game, but I think he’s pretty near his ceiling as a player unless he unexpectedly turns into an average shooter. For that reason, I just don’t see how Rajon Rondo can possibly play any better against the Heat then he did during last year’s playoffs when he averaged a ridiculous 20.9 points, 11.3 assists, and 6.9 rebounds per game.  Neither can Kevin Garnett, who played well on both end of the courts. While Paul Pierce, slowed in part by injuries, wasn’t great, he performed admirably considering his matchup. It’s going to be very tough for the Celtics’ Big Three to improve or even match their performance against the Heat during last year’s conference finals. If the Celtics defeat the Heat this year, it’s going to because of improved play from the other nine guys on the roster.

Best Case Scenario: Due to the improvements listed above, the Celtics are able to upset the Heat in the playoffs and make it to the NBA Finals where they're lucky enough to face the Oklahoma City Thunder or the San Antonio Spurs, rather than the LA Lakers (who may not be the best team, but are easily the worst matchup for the Celts). The C's win their 18th title, and KOBEsh throws up vigorously throughout the Fourth of July whenever thinking about it.
Absolute Apocalypse: Two of the big three miss significant amount of time, leaving the Celtics without home court advantage. A surprise team emerges from the East, bouncing Boston in the first round and leaving the Celtics at home come April 20th. KG, Pierce and JET are all showing their age, as the Celtics are both capped out, nonathletic and old. It doesn't look good in New England

Expected Outcome: 1st in the Atlantic, 2nd in the Eastern Conference