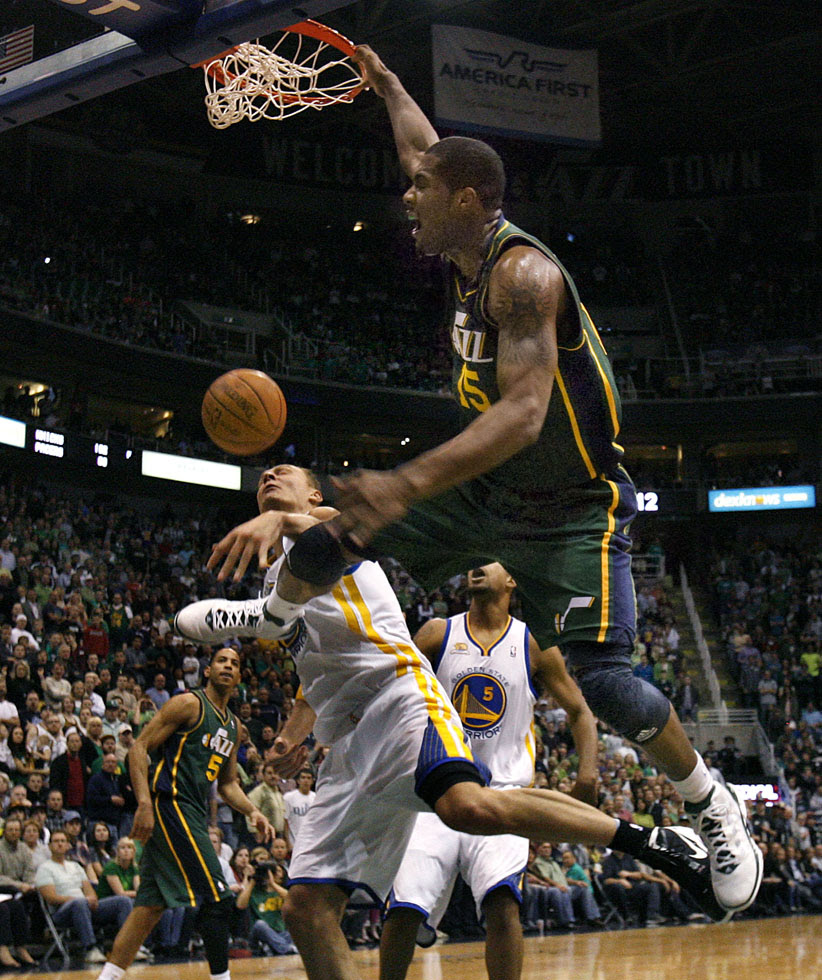 (As per usual, The King is in transit today. I'm posting on his behalf)

Notable offseason subtractions: SG Randy Foye, SF Josh Howard
Kevin O’Connor received an awful lot of Executive of the Year Support for someone who failed at their job.

Back in February, 2011, O’Connor made the decision to start the rebuilding process when he traded Deron Williams to the Nets for Derrick Favors, Devin Harris and two first round picks. It was a great move by O’Connor – the Jazz had no chance of competing before Williams became a free agent and inevitably left utah. By trading him with a year and a half left on his contract, he was able to maximize his value and avoid the fiasco the Nuggets experienced in trading Carmelo Anthony.

O’Connor, like everybody else, figured the Jazz would have to endure a losing year but be rewarded with the lottery pick in a loaded 2012 draft that would help the team in their rebuilding process. The Jazz roster didn’t buy into the plan however, finishing a surprising 36-30 and earning the eighth seed in the Western Conference playoffs.  As result, they lost their lottery protected pick to the Minnesota Timberwolves (in a trade involving Darius Songaila and Antonio Daniels from 2009, of all things).
Missing out on a lottery pick because the Jazz overachieved likely didn’t upset most fans. What is likely upsetting them however, or at least should be, is that management is convinced the Jazz are ready to contend, as evidenced by the trades for Mo and Marvin Williams.

As one of the top five-units in the league, the Jazz frontcourt is certainly championship caliber. Al Jefferson is a prolific scorer down low and only his subpar defense is keeping him from being an elite player. At 27 years old, he’s likely to match or exceed last year’s production. Starting power forward Paul Millsap has really blossomed into quite the player as well, averaging a career best 8.8 rebounds per game last year.

The real gem in the front court though is Derrick Favors. Only 21 years of age, he still has a lot to learn but did show significant improvement last year. At 6’ 10’’, he’s a little shorter than the ideal center. However, he has the athletic ability to develop into a dominating defensive anchor and has shown enough offensive promise that dreams of him becoming a perennial all-star don’t seem too far-fetched.

Enes Kanter, last year's number three overall pick, appears to be another promising frontcourt player for the Jazz. He’s still very raw on both ends of the floor, but showed a knack for rebounding in limited minutes last year. Plus he's gigantic and terrifying looking.

The real issue for the Jazz is there is their backcourt. Gordon Hayward improved leaps and bounds in his second year and Alec Burks showed a lot of promise as well, but both players are still developing and are probably another year or two away from being good starters. The overpaid Marvin Williams, who O’Connor bewilderingly traded Devin Harris’ expiring contract in exchange for (Marvin Williams has two years and nearly $16 million on his deal), and Raja Bell are rotation players, but neither of those players are difference makers.

Point guard is probably the most troubling position for the Jazz. The Jazz used their trade exception this offseason to acquire Mo Williams, a move that can only be justified (and even then barely so) if you are looking to contend this year. I will admit Williams does bring much-needed outside shooting to the Jazz, but as previously discussed, the Jazz aren’t contending this year so I don’t see the point in filling that need with a one-year stop gap who can't facilitate and groaned about a contract extension last season. There are those that believe Alec Burks has the chance to develop into a starting PG which certainly changes the complexion of the Jazz. But considering that he can’t shoot and had almost as many turnovers as assists last year,  I think it’s safe to say that’s unlikely to happen.

If I were the Jazz, I’d be focusing less on this year and more on the bright future that lies ahead which would lead me to do the following two things:

Plain and simple, the Jazz don’t have enough talent to compete this year. Management is kidding themselves if they believe they do, as some of their offseason moves seem to indicate. If their promising young players pan out and the Jazz play their cards right -  trading Al Jefferson for young talent, sign a max free agent wing (James Harden would look awfully good in a Jazz uniform) and re-signing Paul Millsap – they could be contenders in the near future.

Best Case Scenario: The Jazz are able to trade Al Jefferson for an attractive package of young assets and draft picks. The young core shows promise giving the Jazz hope for the future and maximizing Utah’s “appeal” for free agents. However, they still make the playoffs as the 8-seed, mostly based on the amazing play of Favors, whose growth as a basketball player astounds the league in just his third season. Kanter, Burks and Hayward fill in as able role players at the least, but showing flashes of All-Star talent at their best.

Absolute Apocalypse: The Jazz get off to a better than expected start, convince themselves that they are contenders and trade some of their young assets like Enes Kanter, in the vein of their Mo and Marvin Williams trades. The team gets stuck in the worst type of no man's land - it's bad enough to be an 8-seed, but even worse so when that's your ceiling.