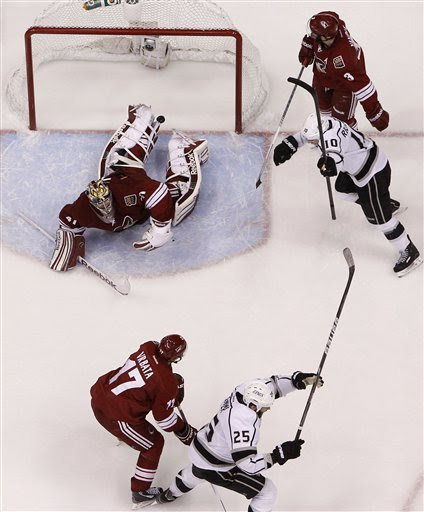 Since the Kings have begun their playoff run, I have contributed to every single game they have won by providing my unique form of support...my juju.

Juju is what I define as the fan's ability to impact games. Active fans of every sport can identify with what I am talking about. That feeling that if you just wear the right clothes and follow the correct routine, you can impact the team in a positive way. You can call it superstition, or stupidity, but you know what I call it.
I have been a believer in the power of juju for years. I started out watching Bruins and Lakers games on TV finding that if I sat in a particular spot on the couch, teams were more likely to win. The science behind these beliefs is inexact but based on personal experience; juju is a very real and powerful tool for any professional sports team.
It may be the longing to belong to a team or the desire to put my own energy into a game, but following the tenants of juju closely makes me feel more engaged with the game on TV and tied to any successes or failures. Just as a good fan should.


EMPLOYING THE RECENTLY PERFECTED JUJU FOR THE KINGS PLAYOFF RUN

What I wear: Old school Kings Sweater. I say old school because right after I invested in this jersey (the most expensive piece of sports paraphernalia I own) the Kings decided to switch to their smooth new black and white jerseys. I will also match the jersey with a pair of old basketball shorts (dark blue Nikes to be precise).

Where I sit: My 55 inch LED flatscreen is surrounded by three couches aligned in a U-formation. I have found that sitting on the far right seat of the middle couch has been incredibly beneficial for the Kings fore-check. 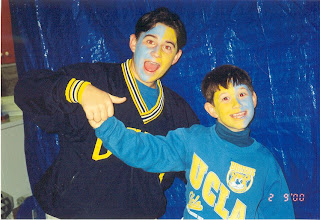 Who is with me: I have been joined by my brother (Little Que-Ese) lying on the white couch to my left for 11 of the 12 Kings victories. He also has his own Juju (particularly how he places the blanket and which blanket he uses) and I respect the intensity he brings to watching the Kings.

So to run a little experiment on how effective my juju has been during this recent NHL playoff run by the Kings, I went cold turkey. I didn’t follow any of the habits I had developed over the previous 11 wins and hoped the Kings would be good enough to win the Western Conference on their own.
I watched the Los Angeles Kings duke it out in a nail-biter with the Phoenix Coyotes ALONE. Little Que-Ese (LQ-E) has started summer school classes and has wrongfully prioritized mastering organic chemistry over helping carry our Kings to the Stanley Cup.
So I was alone on my couch when the following timeline took place:
1st Period
4:20 -  Taylor Pyatt tips-in the first Coyotes goal. I am not too nervous. I am wearing sweatpants and a white v-neck undershirt. I figure without LQ-E there, my juju will be useless even if I am wearing the appropriate gear.
11:13 – Anze Kopitar scores the equalizer. I am feeling a tad better but after the period I text friend of Mambino, Dangerous Dave “Fuck me, we look like shit.”
The period ends and I am still wearing my same outfit and *gulp* sitting on the white couch that runs the length of the front of my house. That’s right, not only am I missing my partner in juju AND not wearing my Kings gear, I am on the wrong couch. What happens next only confirms how close I came to costing the Kings a victory.
2nd Period
6:23 – Marc-Antione Pouliot scores a backhanded goal with an assist from "that punk Klesla" (TM pending). Kings look more aggressive to start the period but the Yotes are really bringing pressure in the neutral zone.
11:06 – Drew Doughty scores with the wrister. With the score now 2-2, I feel as if I was just crazy for worrying so much about my outfit and the absence of LQ-E.
13:43 – Mike Richards hits a wrist shot with assists from Penner and Carter. The text that followed this goal was to KOBEshigawa and read, “So nice he scored it twice.” Which, if you watch the replay, is exactly true. I love it when Richards scores. Love it even more when Penner is contributing to the offense. All this while I am lying on the white couch, wearing the wrong gear.

16:23 – Keith Yandle scores the equalizer and my temporary bubble has been burst. The score is now tied 3-3.
3rd Period
My friend Bethany texts me before the 3rd. “Next 20 minutes are going to be stressfullll.” She had no idea.

Nobody scores to start the 3rd. By the time we get to the first TV timeout, I am losing my mind. I can’t stop standing up and shouting at the TV during each scrum in front of the net. The save that Quick makes at the 8:05 mark of this video is unreal. I lose my shit.

My housemates are not pleased (they are not Kings fans...blasphemy!) and visit me downstairs a few times to remind it’s a Tuesday at 11:30 p.m. and that I am an asshole (true and true).
(Editor's note: True)

Then.
The unthinkable happens.
5:15 – Jarret Stoll booked for a hi-sticking penalty
5:34 – Matt Greene booked for a delaying game penalty (puck over glass)
My heart is in my throat. The Yotes have a 5 on 3 power play at home and I have had enough of just sitting on the sidelines. I move from the white couch onto my normal perch on the middle couch. The Kings do a good job off the bat defending the penalty but it is nerve-wracking as all hell to watch your team defend the net with just a small triangle of players willing to take a shot off their chest/face/body.
(watch the same video from above starting at the 8:29 mark to really get an idea of how shorthanded the Kings were)
And just like that I transition from being a believer in the scientific process to fulfilling my role as an active fan. I am doing my part on the penalty simply by moving to a seat that I KNOW will bring my boys some luck. Experiments be damned, this is too important!
6:34 – Martin Hanzal gets put in the box for interference and the game goes to a commercial break.
This is my chance. I sprint up the stairs, throw on my Nike shorts and my Kings sweater and come barreling back down in time for play to start. I am all in now; sitting in the right seat, wearing the right clothes, ready to lay it all out on the line. The Kings go on to effectively kill the penalty and keep things close while being outshot 16-13 in the finally period of regulation.
Embracing my role on the couch has even led to a penalty being called on the Coyotes Derek Morris (19:33, delaying puck over glass) as we head into overtime.
Overtime
For many Kings fans, this is a worrisome overtime. But for me, even though the Coyotes made a few shots on goal, I know from the beginning of the overtime that this is going to be a win for the Kings. We dominate the puck and kept the Yotes on their heels. We outshoot them and we carry ourselves with the swagger missing from the earlier periods.
On top of all that, I give up my juju experiment and am fully engaged as Dustin “oh captain my captain” Brown goes barreling (legally…?) into Michal Rozsival.

Once again, our captain smacks an opponent in the face, gets away with it, and sparks his teammates to victory. No later than 10 seconds after throwing the Coyotes into a tizzy, the Kings respond with a Dustin Penner game winner.
Read that last sentence one more time.
A Dustin Penner game winner!
In the playoffs!
For the Western Conference Title!
From here on out I won’t be messing with the juju. It may not be science, but it sure as hell is real.
Don’t call me to go watch the Stanley Cup Finals at a bar. Don’t ask me if I want to watch the game at your place.

Come Game 1 of the Finals, I will sitting on my couch (the middle couch, right seat) wearing my Nike shorts and my old Kings sweater. My brother will neglect his studies and have his blanket positioned on his legs just right on the white couch. And we will continue to carry the Kings deep into the playoffs.
As any good fans would.
Posted by Que-Ese at 12:10 PM