I've seen champions before and lived in the cities while they happened. I've seen five Lakers title teams, and two in the 2004 and 2007 Boston Red Sox. I've watched intently as teams have broken decades-long curses, and other teams who arose seemingly out of nowhere to take a championship no one thought could be theirs, but in the end was rightfully earned. I know that feeling you get, a sensation similar to a great idea hitting you slowly but deeply. In every championship season I've witnessed, there's a moment when you realize that the team you're watching could take it all. Or maybe more accurately, should take it all.

You see it in their eyes and in their effort. It's present in the teammates on the bench, whether they're in the throes of competition or in the malaise of a practice. It's that undeniable feeling you get that no matter how bad the loss was, or how emphatic the score, that your team can go all the way. The 2012 Los Angeles Lakers couldn't give me that.

Where to start with Game 5? There's so many angles to take: Andrew Bynum's passive stat line of 10/4 with three quick fouls, zero offensive rebounds and a -6,000 on how engaged he seemed to be in the game. Ramon Sessions making just one bucket all whilst watching Russ Westbrook drop 25 points, each hoop more dynamic than the last. Pau Gasol, in what might have been his last game in purple and gold, aggressively going for a 14/16 night, but ultimately not giving enough for a W. Metta World Peace, despite the worst flagrant foul call I've seen since Tyson Chandler put a flaming sledge-hammer coated in uranium to LeBron's back hit LeBron in the first round, played his ass off in a OKC gym that booed him every time he touched the ball. And then there was Kobe, who dropped 42 points on over 50% shooting, solemnly reminding us how much we'll miss his greatness when he's gone. It's not even worth going over the statistics. The Lakers scratched and clawed for 3 quarters, while the Thunder looked like they were just getting warmed up, like Skynyrd playing a bunch of new middling songs before getting into Freebird. When OKC turned it on, it was too much for the Lakers to handle, and the game ended in a blowout. Of course Andrew's lack of production and the incredible performances by Westbrook and Durant are primary culprits for the loss, but really, this contest was just a microcosm for the entire series.

The bottom line is, the Lakers got beat by the better team. Even in a 5-game series that felt like it went 9, the Thunder didn't just outwork the Lakers; they were flat-out more talented, explosive and hungry. No matter how badly you thought the Lakers played at the end of the fourth quarters, or the mistakes they made to give Games 2 and 4 away, the Thunder had to win them. Down seven with two minutes left? Down 13 with seven minutes left? Both in games where the Lakers largely dictated the pace and rhythm? Maybe this more than anything demonstrates the greatness of the OKC attack - their 9 minutes of play were better than 87 from the Lakers. It only took them 540 seconds to outdo what LA had struggled over 5,200 to achieve. Chew on that thought for a minute and tell me that this was the Lakers series to lose. The Lakers couldn't close it out, which any tested playoff vet will tell you is the most crucial part of competition. 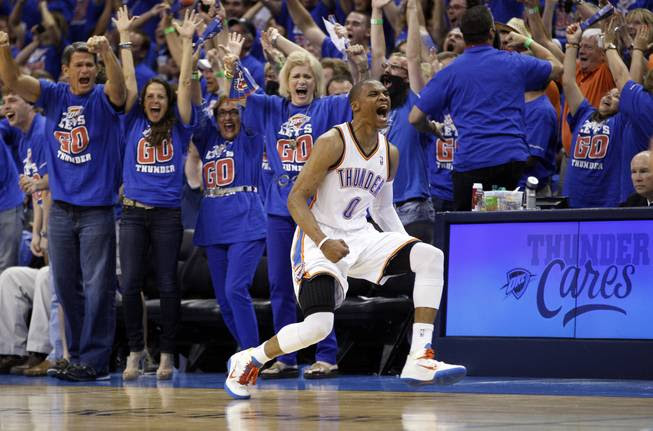 Lakers fans, how do you discount James Harden's hustle and eye for defense? Or disparage Kevin Durant's performance? Or the difficulty level of Westbrook's circus shots? Like I told MAMBINO correspondent Thunderstolt on the phone following the game last night, watching the Thunder's young wing players was an exercise in helplessness. In a remarkably calm fashion, I witnessed the three young guns drop ridiculous baskets on the Lakers, one after another. No matter who the defender was on them, the angle they took or the count on the shot clock, everything seemed to go in when the laws of physics suggested otherwise. After five games of this, I came to the painful realization that "Damn. This is how the other side lives facing Kobe in the playoffs." I suppose I had that coming for 16 seasons now.

And maybe living on the other side of those incredible shots was completely symbolic of what happened this week. It just didn't feel like the Lakers' time. Not this year anyway. The 1st offensive option had too big a role on the team, with his complementary players never quite meaning enough in the grand scheme. The 2nd offensive option was a passive headcase, to be kind, whose behavior on the court would vacillate between a Russell-like transcendence to a Kwame-like apparition. The rest of the role players were inconsistent, to be kind, and horrifically inefficient, to be more accurate. The events that inspired the type of confidence in you that this team had the heart of a champion were few, with the length of time in between each moment giving you more and more pause. If you watched all 12 games the Lakers played in the past month, you'd see all these problems on display. In fact, all of them were front and center in Game 5.

Oklahoma City had their flaws as well. The majority of their offense came from their incredible outside shooting acumen, spearheaded by a range-less Durant and a sublimely smooth James Harden. Aside from their reigning Sixth-Man of the Year, the Thunder's bench was arguably more or less effective than the Lakers'. Perkins and Ibaka are both surely starting big men in the league, but not the offensive forces in the post you want when you need to get an easy basket. On the whole, the Thunder were young and exuberant, both qualities that led to easy turnovers and serious defensive lapses. The Thunder's predicted inexperience was only echoed with their coach Scott Brooks, whose end of game plays and general drawing board aptitude were perpetually questioned.

Yet, here is OKC, 9 games into the postseason, and after watching them dismantle the last two NBA champions, I feel like it's their time. Nothing that any of us saw the past three weeks would suggest that they're not ready.  Kevin Durant throws down a nightly stat line to rival MVP LeBron James', in a performance that suggests the comparison should shift from a platform with Kobe to one with #35. It seems that Durant's "completeness" is really only rivaled with Harden's skill set, who in 10 less minutes a contest almost seems to have a similar game-to-game influence. The less steady of the three, but more decorated than the Bearded Wonder, Russell Westbrook is the x-factor that makes or breaks the Thunder. His streakiness, in comparison with the steady frontcourt production of Perkins, Ibaka and Collison, seems to be the only lingering question as three of the most dynamic, uncontainable players in the playoffs go on to face San Antonio.

The Thunder are confident, experienced and focused. Whereas Kobe seems to be tortured by his continuing pursuit to maintain his on-court perfection, and LeBron struggles in a pressurized bubble of his own creation to attain it in the first place, Russ, James and KD seem to exude a refreshing joyfulness while on the hardwood. Even in the difficult moments, the Thunder take pleasure in their craft, rather than being a slave to it. It could be a combination of factors: their genuine shared friendship, their early career failures, the knowledge that their journey has been a collective one or maybe just a strong belief and faith in the system that Scott Brooks has tailored for them. I'm not sure what it is, but their self-assuredness on the floor every night rivals that of the 4-time champions they're facing in the next round. It does feel like the Spurs' year as well, but in a pinch, I'm going to lean towards the team with the best players who are most hungry to prove themselves.

No matter how close the games were because of the late-game blunders by Kobe, Pau and company, the Thunder won because they beat the Lakers. Now we go into a long offseason for the Show, one which I suspect will feature a trade of at least one All-Star, parting ways with several role players and ultimately, a new look squad come the fall. Coach Mike Brown will stay, for better or worse, with the front office's braintrust assuming that they'd need a full training camp and an ensuing 82-game season to fully appraise how well a team responds to him.

This is all talk for another time and another 17 MAMBINO posts. The 2012 Los Angeles Lakers didn't have the heart of the champion, and it was on full display in Game 5. The best team won. I feel that much, at least.
Posted by KOBEshigawa at 10:03 AM