Every now and then my family will have a fairly large reunion. Aside from seeing faces I don't get to see too often, the best part is eating all the food that people bring. Once in a blue moon, however, the food, overall, doesn't hit the spot. I wouldn't dare describe which foods just in case my family decides to do some detective work on Facebook, but don't worry familia, nobody's perfect. You're allowed to give up a three-run homer every now and then.

Even on that rare day where my taste buds want to huddle together and declare war, there's still usually one dish that will get me through the afternoon. To make up for the rest, I'll keep going back to that particular food item (stealthily, of course).

That basically sums up the rookie class for the 2011-12 NBA season. There are a couple of bright spots in an overall terrible, terrible table of food. Kyrie Irving, Mambino's Rookie of the Year, has played the Cleveland Savior role to near-perfection ("near" because he ended the season on the injury list). Ricky Rubio has dazzled Minnesota fans, giving superstar teammate Kevin Love something to finally smile about...until Rubio himself ended up hurt, tearing his ACL. And then there's YOUR favorite rookie, Iman Shumpert, whose presence on the defensive end will be highlighted in a future Mambino awards post. I feel extra proud of Shumpert's progress as an on-ball super-glue defender just because he plays for my team; it's kind of like when my mama knocks it out of the park when she makes mac-and-cheese or artichoke dip.

But for the most part, the rookie class has been truly disappointing. You'll see. Our All-Rookie teams await you.

KOBEsh: You know you're in trouble when two of your 1st Teamers have played only roughly 2/3 of the season. Thanks, NBA Lockout. You're like the herpes of the sports world; sometimes we forget about you, but the inflammation strikes when we see Tristan Thompson is 1st Team All-Rookie.

We all tempered Kyrie Irving with pretty modest expectations for the season, and even moreso in projecting the number 1 overall pick's career. Everyone (including us) thought he'd take more than his fair share of lumps his rookie year, with a likely high turnover rate and low shooting percentage. In Cleveland, the focus would be on developing Irving, without leaning on him too much. We all saw him as becoming something close to a Jrue Holiday-type of point guard; solid, steady, but un-spectacular. And then Kyrie shoved it to everyone. 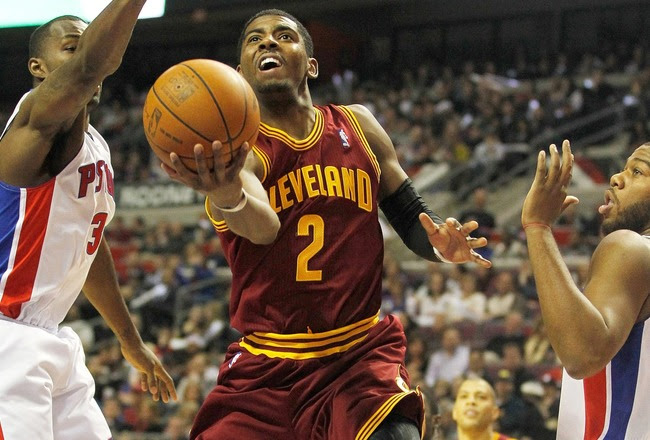 Irving came with an explosiveness and confidence that no one could have reasonably expected from someone who played a dozen games in college. He ran the Cleveland offense efficiently, with the calm of a veteran point guard. He got his own shot with an explosive first step to the hole, and shot the ball with a better stroke than his years should have given him. At the mid-February mark, Cleveland was still on the fringes of making the playoffs, which for a non-rookie, would have made him an All-Star. At this point, would you take Irving for the rest of his career, or Jrue Holiday? There goes that comparison.

One of the stiffs that Irving dragged to competence is our starting center here, Tristan Thompson. Thompson had a couple impressive games during the season, racking 8 double-doubles, including a 27/12 performance against the Nets a month ago. As a community college man's version of Josh Smith, Thompson has averaged 8 points, 6 boards and a block, which is not bad for a 6'9" forward masquerading as a center. When you see who we have on the 2nd team, this will make a lot more sense.

Kawhi Leonard and Chandler Parsons are twin brothers playing on two teams in Texas...I'm joking. Leonard's black and Parsons is white! You're so stupid!

While both players are great basketball players and solid prospects, I think they may both have had successful rookie campaigns moreso because of great GM drafting than anything else. Leonard and Parsons have stepped in pretty seamlessly for a couple squads looking to make the playoffs, a feat not easily done when playing for two militant coaches in Gregg Popovich and Kevin McHale. Especially in Leonard's case, he's starting alongside Tony Parker and Tim Duncan, adapting to their defensive and new up-tempo offensive system so quickly that it looks like he was tutored after school by Bruce Bowen.

Like GM Daryl Morey's mantra, Parsons is a more productive Shane Battier-type, whose presence on the floor can't necessarily be measured by simple metrics like PPG, RPG or APG. His skill set goes into advanced analytics, where you see how much his decision-making affects team success. Or, if you want to just WATCH A GAME, you'll see how good he is.

We started this section by talking about how our expectations for Kyrie were modest, at best. On the other hand, all of us shot for the second coming of Steve Jobs (too soon?) with Ricky Rubio. We thought his style of play could electrify the league, perhaps even changing the way the game is played. Even with our most wild pipe dreams, we weren't that far off. Rubio inserted life into a corpse of a David Kahn-desecrated team, and like Irving, brought the otherwise hapless Wolves to the fringes of playoff contention. While his shooting numbers leave more to be desired and although he's missed over 20 games due to injury, even that couldn't keep him from 1st team honors.

BockerKnocker: The center position really tells you the deal here. Greg Stiemsma has no business being on any All-NBA team, unless he's filling out the end of the bench for KOBEsh's White American NBA Player Power Rankings. To be fair, he has some likeable qualities for a backup big: he can hit a 15-foot jump shot from time to time, he listens to his veteran teammates, and he's not afraid to knock an opposing player down for a hard foul. Those types of things will slowly earn him the respect of the Celtics' big four, but to give the man an award for his rookie season makes me feel like everyone should get an award. You know, those "appreciation" trophies, the ones that prevent parents from having to console their child for being an athletic loser.

Kenneth Faried's a nice energy player. He'll fill the hustle-portion of the stat sheet, and every now and then he'll produce an eye-opening play on both ends of the court. But he's also the benefit of this weak rookie class. Faried sometimes looks extremely lost on defense. In college, he was able to stay close to the paint because the rules don't prevent you from clogging the paint. With the pros, Faried hesitates whenever he has to guard a stretch-4; and the farther you take him from the glass, the less effective he is.

The second team does have its fair share of promise, however. Klay Thompson's play in his freshman season proved be the most comforting reason why fan favorite Monta Ellis was dealt to Milwaukee this past season. Klay is a marksman from downtown, and unlike most young shooters, he has maintained relative consistency behind the arc all season. If the Bay Area can produce a healthy Stephen Curry next year, then Warriors fans might feel stupid for ripping the trade.

Isaiah Thomas was picked with the 60th and final pick of last year's draft, begrudgingly accepting the title of "Mr. Irrelevant." His draft stock was never that high merely because of his height: Thomas towers over us at a listed height of 5'10", and he's probably closer to 5'8". Sacramento even picked two different rookies ahead of him. Tyler Honeycutt, former standout for YOUR UCLA Bruins, hasn't developed just yet, but neither has college media maven Jimmer Fredette, on whom the Kings wasted their lottery pick. Fredette's ball-handling his weak, he can't guard ANYBODY, and he hasn't even provided the lights-out shooting that was supposed to be a guarantee. In other words, he's a homeless man's version of J.J. Redick...yikes, that can't be good. Thomas has his weaknesses, too; he turns the ball over just like many young point guards. However, he has excellent handles and quickness. In other words, he's a modern version of Muggsy Bogues. I'll take Bogues over Redick any day of the week, so Thomas gets some Mambino love. Quite the feat if you ask me; his name alone gave me reasons to omit him from the discussion altogether.

And that brings us to Mr. Shumpert. There is no rookie in the game that means more to his team than Iman does to the Bockers. Like I said, I'll save my analysis for his defensive prowess for another day, so for now I'll focus on the other things he does. On offense, the Knicks are known for being dangerous behind the 3-point line, featuring Carmelo Anthony and super subs J.R. Smith and Steve Novak. But Shumpert has quietly improved his perimeter shooting, and has come up with big buckets in the 2nd half of the season. When he takes the ball to the rack, he is so freaking strong that defenders cannot cheat him by giving him a little bump or nudge from the side; they are forced to play straight up and attack him from the front. Unfortunately, although Shump's strength allows him to control his body well in mid-air collisions, he has yet to establish an ability to finish dunks and layups. His other weaknesses on the offensive end include the indecisiveness in pick-and-roll situations, and the tendency to ball-watch Anthony. But hey, he's in a lot of NBA company for that. I'll take my lumps and wear my #21 t-shirt very, very proudly.

So the overall meal may leave an strikingly average taste in your mouth, but this year's draft class wasn't all bad. Tomorrow, we'll give you the Mambino All-Shumpert Defensive teams.
Posted by BockerKnocker at 11:01 AM