Welcome to MAMBINO's All-Defensive team selection post, or as I like to call it, the True NBA Hoophead Nerd-fest. 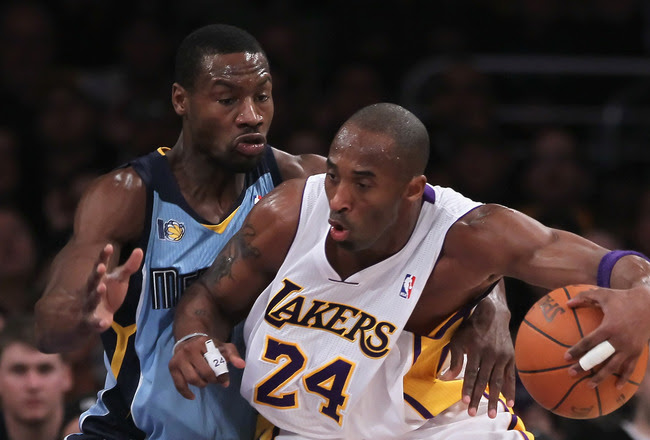 The funny thing about defining the All-Defensive team is that other than watching an ass-load of hoops, there's no real way to quantify whether or not someone makes this team. Sure, blocks and steals are two metrics that could help define defense, but you know who are in the top 5 of blocks this year? Dwight Howard, Serge Ibaka, Roy Hibbert, DeAndre Jordan and professional unintentional comedian JaVale McGee. Do Dwight, Serge and Hibbert deserve some merit for either 1st or 2nd team All-Defensive? Absolutely. But Jordan and McGee? Absolutely not. Both guys make so many boneheaded defensive plays a game, whether it's missing rotations, not sealing an assignment well enough or not boxing out, that even though they get blocks on sheer athleticism, they can't be regarded as All-NBA defenders.

So I'm sorry to the all the nihilistic basketball robot writers out there, who live by complex formulas, plus/minus ratings and efficiency statistics; these awards are given out here by guys who actually watch the game, rather than reduce it to a game of human sudoku. Hai. You have to catch the eye of the true nerds of the game, and wow them with physical play, smart decision-making and of course, suffocating tenacity.

BockerKnocker: Tyson Chandler is not one of the league leaders in blocks, even while standing at a height of 7'1" (Mambino 2nd teamer Serge Ibaka paces the group with a healthy 3.56 per game). Chandler is only 9th in the league in Defensive Win Shares, a statistic that computes the amount of points allowed for every 100 possessions in which the player is in the game. He isn't the best big man at hedging screens, grabbing rebounds, or defending the post. And for the life of me, I can't understand why he fails to box out the opposition or why he has an incessant need to backtap every single loose ball on the offensive end. But in most circles, he is the consensus Defensive Player of the Year, and this heavenly website is no different (for once).

Let's not get it twisted -- Chandler does most of those things at an above-average level. His completeness, however, isn't the primary reason he deserves this award; rather, it only augments the one quality that separates him from the rest of the league.

And talks. And talks. And talks. In just about every situation in life, talking too much has been branded with negativity (or at least that's what people tell me when they explain why I need to shut up). But on the defensive end of the basketball court, a team's leader cannot talk enough. His words form the customary instructions and warnings that are necessary for a team to succeed at getting stops, and he's not afraid to get in the face of anybody, including Carmelo Anthony. But it's not just during games. Chandler is a chatterbox at practices. Chandler will take a player aside, most often a young player, like Toney Douglas, and play teacher, often at the expense of Mike D'Antoni trying to brainwash the team into scoring more points.

People like to say that a true MVP makes the players around him better. In the Knicks' 4 games without Chandler, they revert back to the MDA era Bockers, giving up more than 115 points per game. When the big man asserts his presence by just showing up, the team gives up a staunch 94 points per contest. While Chandler's offensive limitations skew his impact as an overall player, every single Knick from 1-15 is a better defender, individually and for team purposes, because of Chandler. He will be an indispensable part of the Olympic team this summer, he is the consummate professional, and he has been worth every single penny. Sorry I'm not sorry, Chauncey.

The youngest defensive award winner is my favorite basketball player in the game today, Iman Shumpert. Every descriptive phrase has been thrown his way: he's an animal, he's fearless, he has impressive defensive IQ. It's all true. Here's Shump destroying the incomparable Dwyane Wade:

When Shumpert first came into the league, the scouting report said that his defense was a plus attribute, but Mike D'Antoni wanted him solely because the Knicks lacked a healthy starting point guard at the time. Shumpert proved to be very raw with his quarterbacking skills under the direction of the former head coach. He didn't know enough about leading a team with the ball in his hands to make the right decisions. But the emergence of Jeremy Lin (and to a lesser extent, Baron Davis), the coaching change to Mike Woodson, and the constant tutelage of Chandler has allowed Shumpert to focus on turning this plus attribute into a truly elite skill. I have no reason to think that Shumpert's offensive game will improve throughout the course of his career. And if it does, he could find himself on more prominent All-NBA lists.

Oh, there's other players on this team?

LeBron James is one of the most amazing physical specimens this world has ever seen. In Cleveland, he displayed his athletic ability on defense on rare occasions. But in Miami, on defense, one of the best that the NBA has to offer (on paper) is consistently...one of the best that the NBA has to offer. For all of Shumpert's defensive abilities, only LeBron can guard all 5 positions on the floor. He can handle Derrick Rose, he can body Dirk Nowitzki, and he can play dirty down low against Dwight Howard. LBJ has earned all the ridicule and criticism that comes with the territory of The Decision and his disappearance in the clutch. But on defense? Mama, there goes that man. Take a look at LeBron completely taking Pau Gasol out of the play on the lower left-hand part of the screen:

Andre Iguodala and Tony Allen round out the 1st team. They are elite perimeter defenders, using freak athleticism to piss their opponents off. And they succeed on the regular. Iguodala's greatest skill is his wingspan. Jay Bilas loves to talk about wingspan during Draft season, and it makes most people roll their eyes. Overall, yes, the trait is overrated, but give a long wingspan to already-great defensive player and their ability skyrockets; that's why every coach tells you to put your hands up on defense. Iggy covers an absurd amount of ground just by stretching his arms out.

Allen is a frustrating son of a b. He contributes almost nothing on the offensive end, so all of his energy goes into being a brick wall on defense. The dude is a smaller version of Metta World Peace...back when MWP's Herbie Hancock was Ron Artest.

Otherwise known as the "tough ol' mother-effers" team. We in a bar fight tonight, Craig.

Despite being on-court rivals, Chris Paul and Kobe Bryant are in the same building, performing the same type of roles for their clubs; filling up the stat sheet, taking the ball in crunch time and to a lesser known extent, defending some of the oppositions best players.

Even in his 16th year, Kobe still remains an elite defender, though perhaps not doing so at a 100% clip like he used to. However, when called upon, Kobe is a lockdown perimeter guy, capable of taking down just about anyone who cross his path. Chris Paul serves most of the same function, except he's operating as more of a pest the whole game through. CP3 has some of the best hands in the game, displayed by leading the league in steals, and yet ranking only 76th in fouls. There might not be a direct link entirely there, but if you watch Paul defend, you'll see that he rarely comes off on the wrong side of a defensive gamble. Year after year, Allen Iverson would be towards the top of the league in steals, but if you were to watch a a sampling of his games, you'd see how often he blew a defensive assignment because he was going for a heady steal. CP3 doesn't make those mistakes.

The physical embodiment of a "tough ol' mother-effer" has to be KG. In his 17th (!) season, Garnett is working on racked knees, playing remarkably able defense, bodying up guys 15 years younger than him on a nightly basis. For all the props that Tyson Chandler is getting in his first season as the Knicks defensive anchor, motivating teammates and spreading his infectious desire to shut down the other team, KG has been doing this for the Celtics for 5 seasons now. In whatever way he's doing it, the team hasn't gotten sick of his message, as Garnett still quarterbacks the D the same way he did in their 2008 title season. I'm tempted to kick KG off the 2nd team altogether for not leading his team in blocks (....to Greg Stiemsma), but what he's doing at age 35 is unreal.

The book on Josh Smith and Serge Ibaka would appear that they're both just incredibly athletic, rangy players who's YouTube blocks are what gets them any type of All-Defensive merit. However both guys are extremely versatile, able to come out to the perimeter and defend guards, while also be able to get down low and contain most post players. Smith in particular has been fantastic this year, as really the only plus defender on a relatively soft Atlanta squad.

Check out our All-Rookie squads, and look forward to more NBA awards next week!
Posted by KOBEshigawa at 11:22 AM