Instant Trade Analysis: A Heartbreakingly Good Day for the Lakers 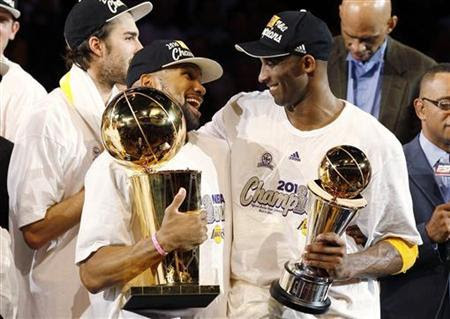 I'm really poor. Let's face facts. I'm in my twenties, young and trying to make it work in the middle of Manhattan. Sometimes - a lot of times - I am often faced with the battle of head versus heart. For example, a couple weeks ago, a college buddy asked me to go on a trip to New Orleans. I spent some time thinking about it, but soon realized that there's no way to extend my meager budget towards a weekend of debauchery and ridiculousness. Ultimately, it's the responsible decision...but my heart will hurt for weeks. I'll know what I'll have missed out on, even as I sleep well at night knowing that I did what an adult is supposed to do. But it doesn't always make it feel any better.

Today, the Los Angeles Lakers dealt Derek Fisher, along with Luke Walton, Jason Kapono and a pair of draft picks, in a movement to get younger, faster and ultimately, a more complete basketball team that can compete for a NBA Championship. It was the best decision GM Mitch Kupchak could have made. But it doesn't make me feel better.

Let's cover the basics first - the Los Angeles Lakers got a lot better today. As I've been decrying for weeks, the best and most effective move the Lakers could make would be to use our draft assets to get a point guard that would give us any level of production beyond the near-ineffectiveness Derek Fisher and Steve Blakers have been outputting the entire season. I always thought that the most prudent move wouldn't be to subtract from our biggest advantage - the size of Pau Gasol and Andrew Bynum - but rather to get even modest play from a modestly-skilled point guard. 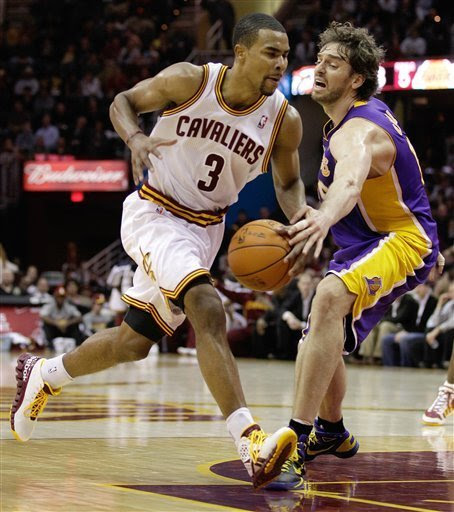 The Lakers did just that, and with a player that I even suggested. Ramon Sessions is not an All-Star, nor will he ever make an All-NBA team. He's a little more than steady, but certainly less than spectacular. He's a floor general who, in the mold of Steve Nash and Rajon Rondo, sees the plays that are going to happen, before they happen. Unlike the half-court, slow-down offense the team has been getting all year, Sessions is capable of penetrating opposing defenses, and creating better shots for guys that couldn't necessarily find anything better on their own. He can control the pace of the game in any manner, whether it's creating fast break opportunities, operating in the the half-court or ably taking an open jumper himself. Ramon Sessions is a pure point guard, in every sense of the word, and is exactly the type of player the Lakers have been missing all year long.

In Jordan Hill and Christian Eyenga, the Lakers are getting a mixed bag. Hill, a third year man from Arizona, is raw on offense, but is overflowing with athleticism and hustle. This year, at his best, he would amount to a black Josh McRoberts, and I mean that in the most complementary way possible. He's young, fast and can finish easily on the break. While he's certainly not the type of offensive spark plug the Lakers needed (I, for one, definitely lament the Michael Beasley trade that never was), he's a guy who has definite room to grow, works well with what Sessions brings to the table, and I think, at his best, could turn into a destitute crack-addict's version of Amar'e Stoudemire. More than likely, he'll be...a black Josh McRoberts, but that's not a bad thing. Eyenga is a young Congolese swingman, who in my viewing, hasn't shown me anything resembling a NBA professional. However, he was a first round selection and is only in his second year. Word is that he'll be sent down to the D-League LA D-Fenders, so hopefully he'll turn into a useable piece down the road.

The two picks the Lakers gave up were certainly useful, but for a team that has, more than likely, a three-year window for winning another title, they were best served in getting help now. As I've said, the Lakers badly needed reinforcements, and the only way to get them without giving up Pau or Andrew was by trading draft choices.

As my roommate likes to say, Luke Walton was the Phil Jackson-proclaimed "heart and soul" of the team. Without the heart and soul, shouldn't we just drop dead on the spot? Luckily, Phil was high when he said that, so I think the Lakers will soldier on. I could probably write 2,000 words on the awfulness of the seemingly never-ending 6-year (!), $30 million dollar deal the over-achieving Walton received in 2006. To this day, it flummoxes me that a slow, unathletic small forward could ever attain such a contract of that length and worth. However, much like Chad Henne's time at Michigan, or Oasis' "All Around the World", what we've been waiting for the end after so long, has finally come to pass. Luke's productivity was unquestionably cut short by a litany of injuries, which is a shame considering what a good teammate and person he seems to be.

As a plus, GM Mitch Kupchak unloaded nearly $3 million dollars in salary commitments for next year and saved $3 million this year, which is doubled with the luxury tax that the Lakers must pay. Essentially, Mitch took 3 contracts that weren't giving the Lakers any discernable positive contribution on the floor, and turned them and two draft picks into two players that allay the two areas where the team needs the most help. In all my years of watching Mitch Kupchak make great front office moves, this might be one of his best. Truly a coup for one of the most underrated GMs in the game.

And then we have Derek.

8 years ago, Derek Fisher amazingly hit a turn-around jump shot in San Antonio with only 0.4 seconds on the clock. That shot turned the tide for the Lakers in that playoff series, and eventually helped advance them in the postseason. A month later, Fisher left the Lakers for the Golden State Warriors. At the time, I remember thinking that Fish was over the hill, and that it was time for him to go. While I felt a tinge of nostalgia as a 5 year starter left the team, but in the end wasn't emotionally affected because I knew it was such a sound move.

Here we are, 8 years later. Derek Fisher is 37, even more over the hill, and the time for him to leave the league was a year ago. He's hit a couple key shots this year (against Dallas a month ago, most notably), but for the most part, he's averging near career-lows in every category. Fisher has been a drain on a Lakers team that desperately needs to push to the pace, and badly could use a point guard with actual point guard skills. His leadership and captaincy do more intangibles for this team than I could ever give an opinion on, but even for everything he gives the team off the court, I can't imagine that it outweighs what he's taking from the team in his minutes on it. I didn't want the man in the line-up except for the last 30 seconds of a tight game, and certainly didn't think he should be starting on a team with championship aspirations. Fisher was dangerously close to pulling what Jorge Posada would have if he had stayed another year with the Yankees - I would have started to hate him for what he's not giving the team due to the ravages of age, rather than remember everything he did over the past decade plus.

With Steve Blakers remaining on the Show, and Sessions more than likely starting, Kupchak did the right thing in shipping out a guard who probably would have had a big problem coming off the bench, or perhaps not registering any time at all, considering how he had started for the past 5 years. This was the right move, and I know that in my head.


But my heart is a different story. Fisher won us game 3 of the NBA Finals, almost single-handedly. He wrapped up a key game 4 in the 2009 championship round, sinking two back-breaking threes to end the game. He's ruthlessly made huge shot after huge shot for legendary teams, playing with all-time greats. Anything I can write here would be a completely disgraceful understatement to the contributions Fisher has made to 7 Finals teams and 5 championships. He has stood shoulder to shoulder with some of the best to ever play the game, and has made us all look at him in a similar light. He's never made an All-Star team, and won't be amongst the historical leaders in any category. And yet, he'll go down as one of the top 10 Lakers of all time. That accomplishment alone, makes my heart hurt. I'm wary about what Kobe's reaction will be, seeing as he was closest to Derek on the team, as well as the adverse effect it will have on the locker room to have their captain and voice of the team gone. But I'm hoping that Matt Barnes, Kobe, Pau and Steve Blakers can make up for the leadership that's lost with Fisher, and even to an extent Walton gone. 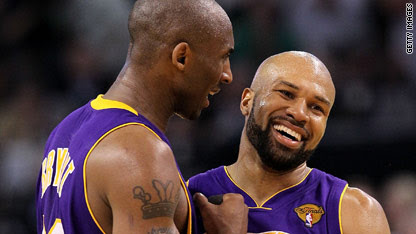 It was the right thing to let Derek go, but I'll feel this one for a long time. It's fitting that his last contribution might be to help deliver the pieces to another title. A great day for the 2012 Lakers, but an awful day for the franchise. Thanks for everything Fish. You'll be missed.
Posted by KOBEshigawa at 12:00 AM