Are the Lakers the Clear-Cut Favorite for the Western Conference Title?

Expanding on an earlier post from Silver Screen and Roll, do the additions of Dwight Howard, Steve Nash, Antawn Jamison and Jodie Meeks make the Los Angles Lakers the clear-cut favorites to win the Western Conference?

The two horses in this race are clearly the Lakers and the defending Western Conference champions, the Oklahoma City Thunder. It's easy to see why anyone would see this more like a lopsided Usain Bolt sprint rather than an actual fair competition: the Lakers imported two players who are one of the five best at their position and heavily fortified their biggest weakness in bench scoring. However, Lakers fans have to temper their expectations. Why? There's just so many variables:

Nash's age, Kobe's age, Jamison's age, Metta's age: Out of these four players, Metta World Peace is the youngster of the group at age 33 in November. Kobe will be 34 later this month, Jamison just turned 36 and Nash is of course 38 years old. Each of these men are still highly effective, competitive players, but are all on the downsides of their careers. I'm not so much worried about their skill level depreciating, as they all still are goodato excellent major league NBAers, but with advancing age, so increaess the risks for injury.

Dwight's back: Unbeknownst to many before his press conference last Friday, Howard admitted that he might not be ready for the beginning of the 2012-2013 season in November (even if he were to be cleared by the doctor today, he's looking at a two to three month rehabilitation period). His injury, originally thought to be a relatively minor hernia surgery, could keep him out of action for up to six months. Obviously back surgeries are a very serious matter, but if the Lakers were willing to give up a major piece like Andrew Bynum (albeit a piece who has injury concerns of his own), Dwight's injury can't be that serious. Right? Either way, it's going to be hard to tell how and at what strength he comes back at.

Jordan Hill's continued development: With the pipe dreams of Lamar Odom's return passing the Lakers by, and the trade of Josh McRoberts to Orlando, Jordan Hill is left as the primary big man back-up. Hill will be called on primarily to rebound the ball, provide defense in the post and generallly fight hard for hustle points. In the last month or so of the season, Jordan finally began to live up to his lofty draft spot as the 8th overall pick in 2009, elevating himself into Mike Brown's rotation--as well as earned himself a two-year, $8 million dollar deal this offseason--by dropping 14 points and 15 rebounds in a season-high 35 minutes versus Oklahoma City on April 22nd. The question is, will Hill continue to shine and morph into a reliable big who will be able to give the Lakers the rebounding and toughness they need? Or will be revert back into the draft bust that MAMBINO contributor El Miz proclaimed him just a year into his NBA career?

Mike Brown's offense: Over his six seasons as head coach, Mike Brown's six teams have excelled at their defensive prowess. Very few people have had the opportunity to criticize Brown in regards of his teams locking down, and rightly so. However, the coach's offense leaves a lot to be desired. Many have justifiably knocked Brown for his lack of creativeness in his team's scoring, despite coaching two of the greatest talents of the last 15 years in Bryant and LeBron James. To Brown's credit, on the Cavaliers he had very little elite players outside of James, and this year's Lakers had seven days of training camp, the turmoil of The Veto and the best playmaking point guard Brown's ever coached in...Ramon Sessions. Now, there will be no more excuses. Brown finally has every piece he could ever ask for. It's on him, as well as new assistant Eddie Jordan, to show that with the proper personnel, Mike Brown can deliver a deadly offense. 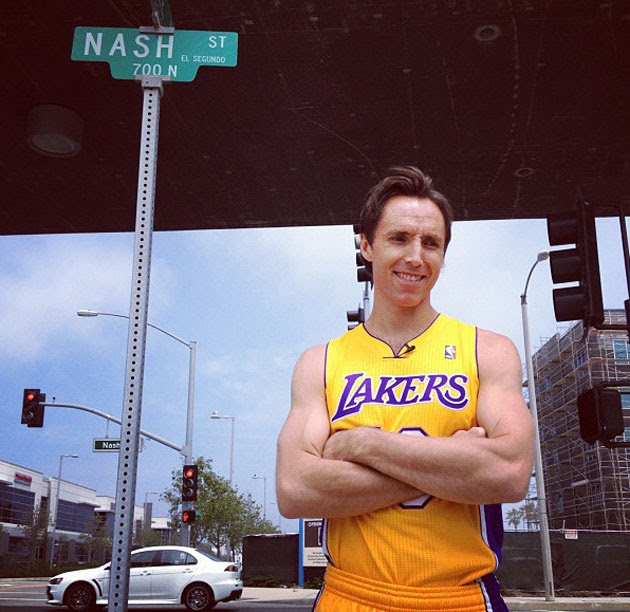 Every issue pertaining to adding two major pieces to a team: The Lakers have added a top five point guard and the best center in the game to a team with a ball dominant guard in Bryant, as well as a top five power forward in Pau Gasol. Their additions are part of a tremendous amount of turnover from the end of the 2011 season, with only five players left on the roster as of today. Though everyone seems to be getting along in their public statements post-trade, at best, there's still going to be a small adjustment period. Nash and Howard have functioned as the focal points of their teams for the past seven and eight seasons, respectively. Now, they'll both be parts of a complex puzzle that Mike Brown hopes to assemble into a titlist. Both Howard and Nash are going to be playing with the type of hunger and passion of two players long awaiting their first ring, but there's always a danger that their championship zeal could cross streams negatively, exploding to Dan Akroyd's dismay. Without a doubt, there are going to be clunky moments, both on and off the floor. This is a completely new set of 3,000 words altogether, but suffice to say, it won't be easy fitting so much talent into 48 minutes per night.

That's a LOT of revolving parts to be concerned about before a season. Very few teams win titles quickly after adding such important pieces to their offense; really, only the 2008 Boston Celtics come to mind as having done it in the last 25 NBA seasons. If this were any other types of player on any other team, I would have a hard time even considering them favorites for their division, much less their conference. However, even with everything seemingly in flux going into 2012-2013, the upside for this Lakers team is not just blowing away the Western Conference, but the entire NBA as a whole. This team's potential is to be not merely great, but to be one of the greatest teams ever to play in the National Basketball Association.

What would that mean? Ideally, Mike Brown would get this team to play the type of stifling team defense he so successfully implented in Cleveland, anchored by an energetic Howard down the middle, eager to win a title and thus shedding the shroud of the past twelve month's "Dwightmare". Kobe Bryant, as he's echoed publicly for the past week, would understand that the key to this team success is for him to take a step back, giving up shots and touches in accordance to the Lakers' newfound glut of All-Stars. Steve Nash, looking at the all the egos and talent on his team, would use all of his powers keep the peace on the floor and in the locker room, orchestrating a scoring attack that would approrpriately utilize every weapon he has in front of him. Pau, who was at times a forgotten man on the floor last season, would benefit from Nash's addition the most, and forcefully reminding everyone that he, not Dirk Nowitzki, is the best power forward in the league. Finally, Mike Brown would prove all of his haters wrong, leaving enough of the offensive reins to Nash, but also creating a system that gave the team enough variety and creativity in their scoring that they would regularly put up 110 a night, while allowing an average of 85. The Lakers would ride their tremendous talent, prodigious bench scoring spearheaded by Antawn Jamison, and an unmatched hunger for a title to a victory over the Heat in June. That is the ideal situation, and one that quite honestly, I could see happening.

Still, even this potential for such stratospheric greatness makes them mere co-favorites to win the Western Conference. Why? Because the Thunder are that good. 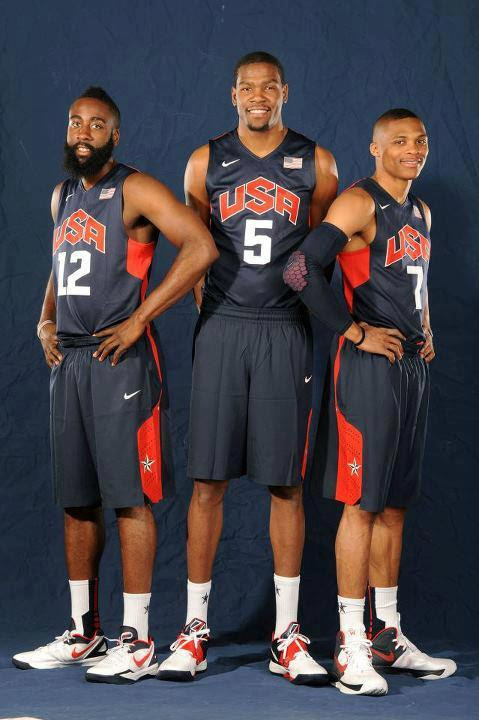 Whether or not OKC remains the favorites depends on the continued growth of Kevin Durant, Russell Westbrook, Serge Ibaka and most importantly, James Harden. The Thunder took another gigantic step forward this year, making it five games into the NBA Finals, whereas the year before they were eliminated in the Western Conference Finals, the year before that being bounced in the first round and the year before that finishing with only 23 wins against 59 losses. The next logical step is of course, a NBA title.

But this isn't logic; it's basketball. The scariest prospect of the Thunder is that all the ingredients for their improvements are in place.

During the 2010 FIBA World Championship tournament, the 2008 Olympic gold medal team completely sat out of the proceedings. Left over was a "B" squad led by Kevin Durant and Russ Westbrook. After the dust settled in Turkey that summer, it was clear that playing with the best basketball players on the planet had a tremendous effect on the development of KD and Russ. Durant's level of play was even further elevated amongst the league's elite, but it was Westbrook that took the most stunning steps forward; he went from a brash guard that attempted too many ill-advised shots and turned over the ball at an alarming rate to an All-Star and All-NBA 2nd Teamer.

These Olympics featured a Team USA with Durant, Westbrook and James Harden, as well as a Spanish national team with Serge Ibaka backing up the Gasol brothers. After spending the past month with the best in the world at the Olympic games, the core four members of this incredibly young, hungry team that craves respect and thinks about nothing but winning will be spurred to even greater heights. All four of these players will be 24 years old or younger when the season start. They are only getting better, wiser and more experienced, as they begin their fourth season playing together. While the addition of Dwight Howard, Steve Nash and Antawn Jamison is gigantic for the Lakers, there isn't enough that can be said about a young team with continuity that has two of the best ten players in the league, both just at the beginning of their primes. As much as the Lakers have gained in the past few months, the Thunder may have offset that advantage merely by growing up.

Stylistically, the Thunder should still be an incredibly difficult matchup for the Lakers. Despite all their personnel upgrades, LA still doesn't have an answer for the Thunder's three deadly perimeter threats who hit jumpers by the boatload. The Lakers still lack enough effective wing defenders to guard Harden, Westbrook and Durant, each of whom can easily get Howard and Pau into foul trouble by driving to the rack and creating contact. I would expect the Lakers' bigs to be able to overwhelm OKC on the other side of the court overall, but it won't be easy considering the defensive excellence of both Ibaka and Kendrick Perkins. Here's hoping that a summer with LeBron, Kobe and Chris Paul doesn't get Westbrook, Harden and Durant to focus on defense any more than they already do.

To the Lakers' credit, GM Mitch Kupchak has given the team more talent and depth than the Thunder can match. Quite frankly, LA has more scorers than Oklahoma City can defend, which is more a compliment to the Lakers than a deriding comment towards the fantastic Thunder team D. However, that all depends on if the Lakers can learn how to play with one another in just a few short months. I am not completely sure that's possible. Still, I have faith that the Lakers offense, like Oklahoma City's, will be nigh unstoppable. At the end of the day, I think it'll come down to who can stop who. I'd like to believe it's LA, but with so many variables, it's extremelyhard to make a prediction right now.

To answer the question, are the Lakers the favorites in the Western Conference? Maybe, leaning closer to yes. Clear favorites? Definitely not.
Posted by KOBEshigawa at 9:54 AM