The 2012 NBA Finals: One of the Most Historically Significant...Ever

Let's ignore the usual rhetoric for now. We're going to take the LeBron fourth quarter statistics and put them off to the side. We're going to, for the moment, disregard his erratic and immature behavior that even we here at MAMBINO can't shy away from critiquing. We're going to stop talking about the questionable nature in which the Miami Heat came together two years ago. This isn't going to be about how Dwyane Wade has slowly morphed into one of the most despicable on and off-court character in the league. Hell, this isn't going to be a sychophantic pedestal-job on Kevin Durant, Russ Westbrook and James Harden that we've professed to loving so much more than Bron and his ilk.

The prevailing storyline might be if the Miami Heat can finally win their title that they pissed off the entire world while questing to do so. The secondary yarn here is if LeBron James, by all accounts and MVP trophies the best player on the planet, can carry an unorthodox and limited team to a title. And a footnote to all of this is if Kevin Durant, James Harden, Serge Ibaka and Russ Westbrook - all under the age of 24 - can upstage their celebrity opponents and upend them for their first championship.

That's not what's important here. Is it a big part of the story? Yes, it is. Very. Extremely. LeBron, Wade and Bosh are all in their ninth seasons, with only Wade capturing the ever-elusive chip in 2006, though with Shaquille and Alonzo at his side. Durant, Russ and Harden surpassing them would be a fantastic story that the NBA-watching public could absolutely engorge themselves with - the thought of the noble, beloved, blue-collar Thunder from the humble breadbasket of America defeating the glamorous villains hailing from the neon-satured, sun-soaked South Beach would be a screenplay come to life.

For the NBA-head though, this isn't just a tale of the young, hard-working Thunder vanquishing the evil thespians from Miami. This is a match-up of the two best teams in the NBA. Lasting up to seven games, this year's Finals pits six of the NBA's best 20 players against each other, highlighted by the consensus top dog in James and the runner-up in Durant. As anyone who watched Tuesday's Game 1 will attest, this isn't just about a set with star-power - this is going to be a tough, grinding series that no matter who the victor is, we'll all agree that the trophy was well-deserved.

The Oklahoma City Thunder versus the Miami Heat isn't just going to be a great Finals. This is one of the most historically significant Finals ever. And heres' why.
I've spoken at length about the "generationalism" there is in the NBA. Determined sometimes by draft class, age or style of play, groups of players are often banded together with an unmistakable bond that fans always seem to identify them by.

There was Jordan's generation, and before that, Magic and Bird's. After Jordan, it was Shaquille, Timmy and Kobe ruled the roost. The specific players mentioned up top is always up for debate, but in the end, no one's really questioning whether or not these guys were the leaders of their peers.

What's incredible about the NBA is that unlike baseball, football or hockey, there seems to be rules that adhere to the game decade after decade. One of these rules, or concepts I should say, is that for the past 30 years of NBA basketball, there is a definite breaking point, a specific event, that delineates generations between each other.

In 1980, Magic Johnson led the Los Angeles Lakers to just their second NBA title since moving to Southern California. The future Hall of Fame point guard was in his rookie season, aged just 21 years, but even without the legendary Kareem Abdul-Jabbar, willed the Lakers to victory and winning the Finals MVP along the way. While the preceding stars like Moses Malone and Julius Earving would still contend for (and win one) NBA title, Magic's ascent signified new generation rising to the forefront, including stars like Kevin McHale, Isaiah Thomas, James Worthy, Dominique Wilkins and of course, Larry Bird.

Whether they knew it or not, a decade later that group of players were working on borrowed time. Fresh off of a run that included either Johnson, Bird or Isaiah winning 10 of the past 11 titles, Michael Jordan, Scottie Pippen and the Bulls swiftly put a stop to any future on-court accolades for any of those men. After destroying Chicago for years during the 80s, the Pistons were essentially never heard from again after the 1991 playoff defeat to Jordan. Michael would go on to face Magic's Lakers in the Finals, and in a symbolic victory that was almost as complete as the physical, his Airness snatched the crown away from the Magic man, and a new decade of basketball dominance was born. 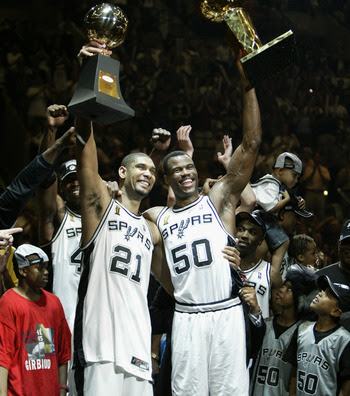 For the next eight years, either Michael Jordan or Hakeem Olajuwan, both drafted in 1984, held both the Larry O'Brien trophy and the Finals MVP honor high as the season ended in June. However, as Michael embarked on his second retirement in 1998, a new king had to be crowned. That first sire was Timothy Duncan. In the lockout-shortened 1999 campaign, Timmy's Spurs steamrolled the competition, eventually defeating the New York Knicks for San Antonio's first title, complete with Duncan's first of three Finals MVP trophies. For the next 11 seasons, either himself or four of his contemporaries - Shaquille O'Neal, Dirk Nowitzki, Kevin Garnett and Kobe Bryant - would win the championship. I've coined them the ESPN Generation, and they fulfilled every bit of their promise by dominating their era. Though the geneaology isn't quite as archetypal as Magic 1980 victory over the previous decade's star in Dr. J, or Michael's win over Magic in 1991, the changing of the tide is clear between MJ and Duncan.

Which brings us to today. For the first time in over a decade, one of those five gentlemen won't be winning the championship. In fact, unless Derek Fisher somehow finds a way to drop 30 a game, this will be only the second time next to Dwyane Wade's 2006 trophy that a man born in the 1980s will win a Finals MVP. Most likely, that award will go on either LeBron James' or Kevin Durant's mantleplace. Amazing.

The NBA is an incredibly generational game. In this little experiment of 2,000 word over-simplification, the last 30-plus years of NBA history have been distilled down to its core essence. A group of players has almost always dominated an era, which seems to be outlined by the changing of the decade. It's hardly surprising - most basketball players have a 10 year window for "their prime". Though the rule isn't always steadfast - see Moses and Dr. J's 1983 title and the Dwyane Wade led (but Shaquille assisted) 2006 Heat title - but for the most part, it's very consistent. The best players in the game take over for 10 years at a time, and very rarely do they ever let go during such reigns of excellence.

What we're going to watch for the next two weeks isn't just a fantastic match-up between two great teams. This is historic. Last year when Dallas won the title, I wrote about how this generation of NBAers - Kobe, Garnett, Duncan and of course, Dirk - would be able to hold the torch for another year. It just wasn't their time to go. That group of players held on tight, hoping to extend their lengthy reign as the alpha dogs of the league for yet another season. Not the case this year. No matter who wins or loses, the page has turned.

Not only will this signify the birth of a new era of NBA basketball, but it'll do so under the auspices of a head-to-head matchup of the game's best two players. This is a rare feat, and by my count, has  only happened four times in in the last forty years, including 2012 (keep in mind that this is a Finals duel - for example, Tim Duncan and Shaquille, the two best players at the time, squared off in Conference battles in the late 90s and 00s, but never in the Finals):

Of course this interpretation could bend depending on personal opinions. It's hard to argue that those weren't battles between the game's best players at the time...but you could do it.

The 1993 Finals between Jordan's Bulls and Charles Barkley and the Phoenix Suns could be included here, as well as Jordan's showdown with Clyde Drexler and the Portland Trailblazers in 1992. However, Hakeem Olajuwan's shadow looms large in that discussion. 1974's matchup between Kareem's Bucks and Havlicek's Celtics could also count, but it's a hard decision between Hondo and Rick Barry as to who came in second to Abdul-Jabbar's top dog. Reigning MVP Karl Malone faced off against Jordan yet again in the 1998 Finals, but even the angel on top of the Mormon church would say that Shaq was a superior player to Malone at that point.

It's incredibly hard to proclaim the best player of his era, let alone who's a number one and two. However, in 2012, it's easy to look at the field and pick two: LeBron and Durant. Simple. And incredible.

The 2012 NBA Finals has importance tantamount to Jordan winning the chip in 1991 and a young Magic and Duncan taking home Finals MVPs twenty years apart. Not are we looking at a seminal moment in NBA history, but we're doing so with the league's two best players vying to see who will forever stand as the landmark player that officially anointed this "their" era. This has only ever happened once in the last forty years, and the two men to do it were arguably the two greatest players ever to lace up - MJ and Magic.

It doesn't matter if you hate LeBron, or like BockerKnocker and I, desperately want to find reasons to appreciate one of the most unique and talented players in the history of the game, still in his prime at the ridiculous age of 26. Forget that you're a Seattle Supersonic faithful, painfully reminded of how a team that should be the pride of the Pacific Northwest now stands just three victories away from a parade. All those stories are fantastic theater, some more painful than others. But this isn't just a dramatic production - this is history. This is one of the most important moments in this league and in this sport we all love so much. Your children will ask about this series, and you'll reminisce that it was the year that the NBA changed forever.

Let's enjoy it.
Posted by KOBEshigawa at 1:10 PM