State of the Devils: The Trouble with Marty 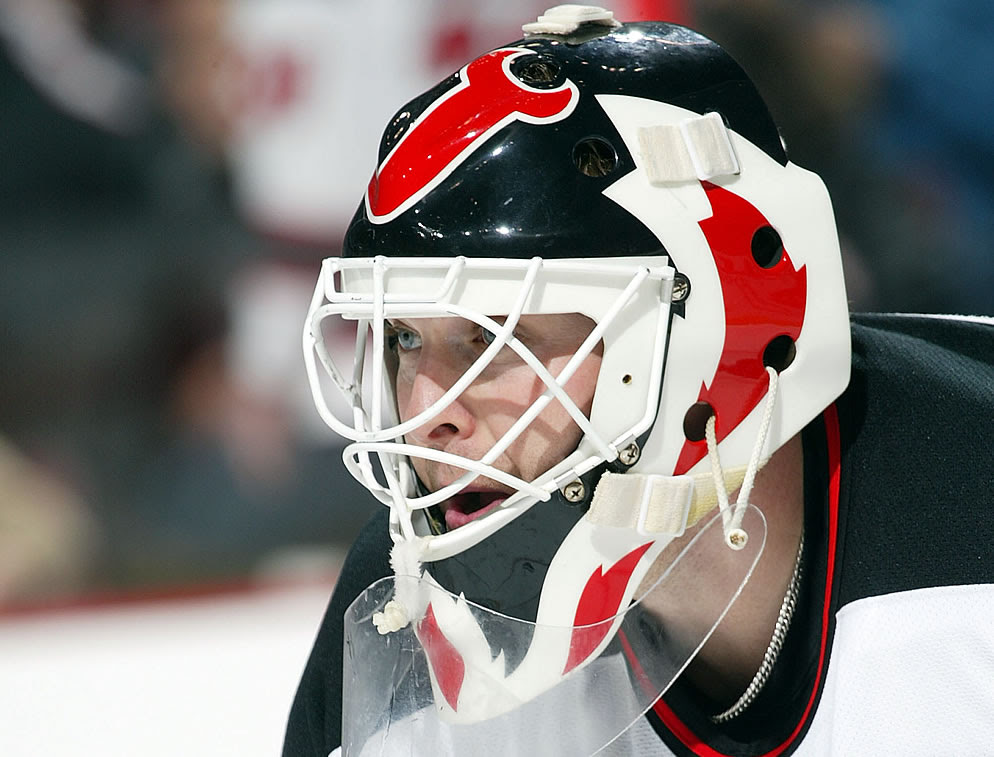 By all accounts, the New Jersey Devils are doing quite well relative to their expectations this season. The 2011-12 NHL regular season is roughly halfway over, and while the Devils' place in the postseason is far from assured, they're currently sixth in the East -- a better mark than expected Cup contenders like Washington, Pittsburgh and Tampa Bay. Ilya Kovalchuk, with 38 points in 38 games leads the team in goals and is playing like his contract requires, Zach Parise has overcome a slow start to put up 38 points himself, Patrik Elias is playing like he's 26 again, putting up a team-leading 40 points, and the Devils may have uncovered diamonds in the rough both old (Petr Sykora has turned a training camp invite into 22 points) and young (All-Star rookie Adam Henrique's numbers -- 13 goals, 21 assists, plus-9 have him looking like a future star).

After some rocky beginnings, the Devils appear to have bought into new coach Peter DeBoer's system, and his aggressive penalty kill is so impressive that New Jersey not only leads the League at 90.4%, but with an NHL-best 11 shorthanded goals in 70 opportunities (15.7%), the Devils are actually more likely to score down a man than on the power play, where they've scored 22 of 148 times with the man advantage (14.9%). That may say more about how bad their power play is than anything -- and it is fairly bad -- but the point is they aren't handicapping themselves with mistakes, and their aggressive forecheck is creating opportunities, which are leading to wins. Need an example? Look no further than Wednesday night, when Kovalchuk displayed just how effective New Jersey can be at forcing chances off its defense.

But as any dedicated Devils fan could tell you, the positive signs the team has display are encouraging, but with the team unlikely to compete for a Stanley Cup this season, they are just background noise for the two biggest weights that hang on New Jersey's shoulders. The first is Parise's uncertain contract status, but as neither side seems to be talking during the season, with little news to report, there is little to talk about. The more prominent concern, however, is the uncomfortable process that every team must deal with eventually, that of an aging superstar losing his skills but needing a face-saving ride off into the sunset. The Devils have never really dealt with that before. It's unusual that one of their star players remains with the team through the end of his career -- particularly since New Jersey has never seemed particularly interested in cultivating "stars" -- but the closest approximations the Devils have dealt with so far are the three men whose numbers hang in the rafters.

Of those three, none of them ever presented the Devils with the uncomfortable quandary. Ken Daneyko retired when his skills had clearly eroded (though not before providing an emotional boost by playing in Game 7 of the 2003 Stanley Cup Final after being a healthy scratch through the first six games), Scott Stevens had his career end due to a concussion and Scott Niedermayer played the last five seasons of his career in Anaheim. While the retirement of their numbers is warranted (though some could argue Daneyko's place in that lot), none of them represented the awkward situation nor the titanic stature of Martin Brodeur.

No one can argue Marty's on-ice achievements. He is the NHL's all-time career leader in regular season wins, shutouts and games played. In his career he's won a Calder Trophy, four Vezina Trophies and five Jennings Trophies. He holds the mark for most wins in a single season with 48, he has won 40 or more games eight times, he's made 10 All-Star Games, he has a sparklingly low career goals-against average of 2.24 (with two seasons of an unheard of sub-2.00 GAA), he's won a World Cup of Hockey, two Olympic Gold Medals and, oh yeah, he's led the Devils to three Stanley Cup championships. And did I mention he can handle the stick, too?

By nearly any account he is one of the top two goalies to ever play the game -- many would place Patrick Roy ahead of him as a result of his playoff record, perhaps deservedly so -- but regardless of what those numbers look like, it's hard to quantify not simply how great -- and he has been great -- Brodeur was in his career, but perhaps more importantly just how much he means to the Devils franchise. Make no mistake about it. In the course of New Jersey's history, which now spans 30 years in New Jersey and 38 years in total, Brodeur is an absolutely titanic figure. With all due respect to longtime GM Lou Lamoreillo, no individual looms larger in Devils history, few loom larger in the last 20 years of NHL history, and one could make the argument that Brodeur means nearly as much to his team as any player that was only associated with one franchise has ever meant to their team across any major North American sport. I don't want to say that he is Derek Jeter, Magic Johnson and John Elway all rolled into one, but it's hard to argue that he isn't either. For Devils fans he is an icon of almost absurd import and impact.

But Marty's getting old.

You don't take down the records Brodeur has taken down without sitting between the pipes for an awfully long time and Brodeur has done just that. While he has missed stretches due to injury in the last few seasons of his career, Brodeur has been remarkably durable, playing less than 67 games only once in a non-lockout season between 1995 and 2010. But now the age is showing. The last time someone other than Martin Brodeur was New Jersey's full-time No. 1 goaltender, Bill Clinton was in his first 100 days, Saved by the Bell was still airing new episodes, ESPN2 did not yet exist, The X-Files didn't either, and we all thought the Spin Doctors were just great. Marty turns 40 this May, and that's not an age professional athletes generally improve after.

What's more is that his aging has happened in surprisingly sudden fashion. In the 2009-10 season, Brodeur won 45 games and had a 2.24 GAA. Two years later he's struggling. Brodeur is technically still the No. 1 goalie, but the starts have gotten closer between him and backup Johan Hedberg -- Brodeur has 26 to Hedberg's 17. But The numbers seem to show that just maybe, the roles should be flip flopped. Brodeur is 12-10-1 with a mediocre 2.98 GAA and a .891 save percentage. Hedberg is 12-7-1 with a 2.45 GAA, a .909 save percentage and the Devils' only two shutout wins this season.

You'll notice that Hedberg's record has him as the goalie of record in 20 games despite his 17 starts. Likewise Brodeur's 26 starts to his 23 games as the goalie of record. The reason for that is that Brodeur has actually been pulled four times this season due to poor play. Generally that's not so unusual. Goalies get pulled all the time -- everyone has a bad day at the office -- but with Brodeur it's happening with surprising frequency, and if Brodeur's postgame comments after Tuesday night's loss in Calgary are any indication, it's starting to get to him. DeBoer gave Marty the hook after he gave up two goals on five shots in the first 7:32 in what he later said was an effort to spark the team. Hedberg, didn't do particularly well either that night, giving up an equally awful four goals on nine shots over the rest of the game -- though he did start the next night in New Jersey's overtime win in Edmonton. But the biggest news to take is that the yanking did not sit will with Brodeur.

"Definitely I'm not going to say I deserved it or whatever. He probably felt it worked once in Ottawa and he'd try to do it again. I don't know his thinking process on that one," he said. "Especially games like that you have to give me a chance to play. Seven minutes into the game, it's not over yet. Maybe he tried to spark the team or something. It just didn't work this time."

This singular incident isn't particularly noteworthy because it is rare, but for a goalie who has generally been one of the most unflappable players the game has ever seen, it's the first real evidence of age-induced friction between him and his team -- a team he has made a point to take less money to be a part of over his career.

This is all a sign that however wonderful and happy the marriage was, the divorce could get messy. Certainly with the work Brodeur has put in and given to the franchise over 19 seasons, he has earned the right to end his career on his own terms. But how does New Jersey balance that against the interests of a team with legitimate postseason ambitions and a backup who appears more capable at the moment than the starter at helping to achieve them? This is the big question that will hang over the player and the franchise for the rest of this season -- and that's assuming Brodeur is even ready to retire at all. Brodeur is in the last year of a contract paying him $5.2 million a season, and while he certainly wouldn't get that much money again, he still can steal games and flash the glove once in a while, and may not be so ready to hang up the skates, even if the numbers say he probably should. 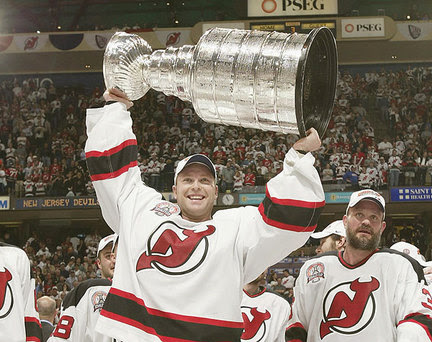 As a young Devils fan with naivete and stars in my eyes in the mid-2000's, I was convinced that Marty had one more Cup run left in him for years, and had there been some slightly better talent around him, maybe he would have. But at this point the ship has sailed. He's not awful by any stretch, but he's not playing like the legend he is either. Simply put, Brodeur's time as come, like Constantinople or Rome before him. Beyond trying to win whenever he's put on the ice, Marty must be concerned with leaving the game as New Jersey's Ted Williams rather than its Brett Favre.

Either way, both Brodeur and the Devils need to be careful. Years from now his number will be in the rafters and his place in the hall of fame will be official. Many will forget how acrimonious, if at all, his departure from his playing career was. But in the immediate future, it's getting awfully close to sink or swim time as far as how gracefully both sides can facilitate him riding off into the sunset. And for a figure as titanic in size and influence as Brodeur, the player and the team will each need to tread lightly.

After all, the Titanic was a beautiful boat before it sank.
Posted by Pucklius at 9:52 AM